Fifteen years ago, I traveled to Hong Kong and China on a mission trip. On the long flight, I grabbed a National Geographic Magazine from the Singapore Airlines stewardess. I quickly unfolded the inserted map inside which showed the most environmentally clean countries in the world to the most polluted. The countries pictured in black (the most polluted) were China and India. I was soon to fly into black clouds over China only to find these were clouds of pollution. The grey countries still needed much improvement and included Mexico. Our own United States was colored light green in a positive light but revealing room for improvement. Then there were just a few countries which were doing the most to protect the environment colored in bright green. These countries were New Zealand, Finland, Norway, and Sweden. On our trip, we got a first-hand look at the beauty and environmental practices of three of these Scandinavian countries. And here’s what I learned.

Green energy is abundant and everywhere.

We rode on electric trains, Tesla taxi cabs, large electric transport boats, and electric buses. Norway and Sweden have a goal of having 70 percent electric cars in the next 3 years. We saw windmill cities on land and in the ocean. We saw solar panels everywhere. In fact, nearly 70 percent of their energy comes from hydroelectric (waterfalls), solar, and windmills. They are even working on an electric plane! See picture below of a plant in Denmark that turns trash into green energy. The smoke coming out of the pipe is actually mostly steam!

Scooters, bicycles, feet, and public transit were the main modes of transportation.

As a result, we did not gain weight on our trip, and we biked several cities and walked 5 to 7 miles each day. There were bike lanes everywhere and we loved it. We biked all over Stockholm to do our site seeing. Most people use a combination of bikes, scooters, or walking to get to work. Public transportation is used for further distances.

Here we are biking down a mountain in Flam, Norway.

These countries have reservoirs of clean water which are set aside for drinking use only (no boats or people allowed to use). They further filter these waters with sand, but no chemicals are needed. These Scandinavian countries are known for the cleanest and best drinking water in the world. 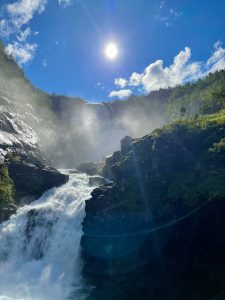 Norway, Sweden, and Finland supply their citizens with clean water much of which comes from melting glaciers.

Whereas there are a few, but growing number of organic crops in the United States, organic produce is easy to find in these countries. Heavily pesticided crops are not the norm in these countries. The European Union and Norway and Sweden (Finland is in the EU), do not allow dairy and meat products treated with rBGH, and they do not allow GMO foods.

Even with all this green energy, the locals clearly told us that food and energy are very expensive. We experienced the food part when Alton ordered a $35 hamburger plate!  Even though Norway is also one of the top ten producers of oil in the world, oil and gas prices were equivalent to $10 per gallon!  Yikes, And we thought we had it bad. $4 -5 never looked so good! Many Scandinavians are concerned about the cost of heating their homes in the wintertime.

We loved the clean air, clean water, and beautiful scenery. But the cost of living was very high. We envied the abundance of bike paths and efficient public transportation. These countries could survive an oil/gas crisis because of their electric cars, green energy public transportation systems, etc. We are not set up for these things in this way in the US. Although I envy their clean energy, bike paths, clean water, etc., I could never survive a long winter here. I’m just a sissy. We certainly could learn much from these countries, but they also have the huge land mass to make this work. The land mass of Norway is five times the land mass of South Carolina with the same population (5.5 million).

I have no problem with moving towards green energy. I do believe it is better for us because of less pollution. But it can’t be forced and done overnight. We must continue to work on these green energy ideas to make them more efficient and affordable. The transition must be gradual and not strangle our economy. Change will take time.

How many of you have traveled to these environmentally advanced countries?  What did you think?