Does Vitamin D Help with Covid-19?

When I was first diagnosed with cancer, my oncologist immediately ordered a blood test that measured my Vitamin D levels. They were 28 ng/mL. Three of my doctors suggested that if my levels had been higher, I might not have gotten cancer. Research suggests that individuals with Vitamin D3 levels of 40 ng/mL or more have half the risk of getting cancer than those with levels less than 20 ng/mL.  Technically, my levels were insufficient. But no more. Then I heard doctors recommend Vitamin D for Covid-19. So, what does the research say about Vitamin D and Covid-19?

A research team led by Northwestern University conducted a statistical analysis of data from hospitals and clinics across China, France, Germany, Italy, Iran, South Korea, Spain, Switzerland, the United Kingdom, and the United States. They were inspired to examine Vitamin D levels after noticing unexplained differences in COVID-19 mortality rates from country to country.

Specifically, they noted that patients from countries with high COVID-19 mortality rates, such as Italy, Spain and the UK, had lower levels of vitamin D compared to patients in countries that were not as severely affected. What they found was a significant correlation with Vitamin D deficiency. They also found a possible role of Vitamin D in reducing complications attributed to unregulated inflammation and cytokine storm.

Dr. Vadim Backman and his colleagues at Northwestern found both a strong correlation between Vitamin D levels and cytokine storm and between vitamin D deficiency and mortality. The cytokine storm is a hyperinflammatory condition caused by an overactive immune system. Backman believes that Vitamin D enhances our innate immune system and also prevents this overactivation. According to Dr. Backman, “Vitamin D may not prevent someone from getting Covid-19, but our analysis shows it may cut the death rate by as much as 50 percent and reduce complications in those who are affected.”

However, in another study found in Nutrients and published in April 2020, researchers outlined three ways that Vitamin D could prevent and treat not only Covid-19, but also influenza and pneumonia: 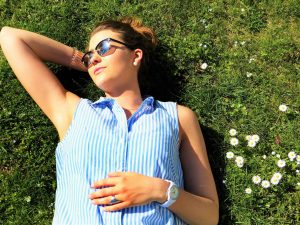 Besides supplementation, Vitamin D comes from food sources such as fatty fish, egg yokes, and cheese. It can also be synthesized in the skin from sunlight exposure.

Vitamin D3 is involved in immune system modulation, insulin sensitivity, hormone and neurotransmitter homeostasis, and ensuring calcium absorption in the bones. So, what level of Vitamin D is optimal?

According to Dr. Ray Schilling:

Below 15 ng/mL the immune system is paralyzed

Below 30 ng/mL the immune system is insufficient

All I can say is, “I want my immune system functioning at optimal levels!” My oncologist now checks my Vitamin D levels yearly and advises me to keep them in the 70 to 90 ng/mL range. Vitamin D is inexpensive for the many benefits gained in preventing heart disease, diabetes, cancer, influenza, and viruses such as Covid-19. Next time you visit your doctor for your yearly exam and do blood work, ask for these levels to be checked. Vitamin D gives us a lot of bang for the buck. No wonder so many doctors are recommending it.

Did you know that vitamin D had this many benefits? Are you working with your primary care physician to make sure your levels are optimal?