Hope is the assurance that God will use all things for His glory and our good. The Blessed Hope is our assurance that the same Jesus who came to earth as a humble baby in a manger will eventually return taking us to our heavenly home. Every child of God should anticipate and await His glorious return setting up His Heavenly Kingdom.

My mother, Betty Dent, could be blunt at times, especially as she aged. When my husband and I were passing through Columbia in January of 2014, she dropped a bomb on us.

“I have breast cancer,” she said. And then with a twinkle in her eye she continued, “This may be my ticket to Heaven!”

My mother understood Heaven – that eternal place God has prepared for his children – as “The Blessed Hope.” She looked forward to the day when that chariot in the sky would swing by taking her to her heavenly reward. And when her time came, no one better get in her way!

She was ready. . . ready to leave this fallen world . . . ready to be in His presence forever . . . ready to be united with her beloved Harry, sister Marie, mother Hattie, and so many friends in the faith like Buck and Mittie Hatch. She had her bags packed and her hand stretched out like a hitchhiker. She was just hoping that great chariot would swoop down low enough to scoop her up and bring her home. And Nove. 10, 2014, that chariot graciously took her home.

So what began with a tiny baby over 2000 years ago became the Blessed Hope for all the world. For those who would believe in His name would be given the gift of true life –Eternity in Heaven.

For the cancer patient or any person in a difficult situation during this Christmas season, our circumstances may be unbearable, but the future gives us the HOPE to get through the present. That Blessed Hope is the assurance that our lives will improve even if cancer or some other calamity is our ticket to Heaven.

As Katy Kauffman has so eloquently said, “God is a brilliant writer. His story is not one with fictional characters, for His story has played out through history. And it continues today.” (From The Write Conversation Blog, December 18, 2019). Let His story be played out in your life until He sends His chariot down low or you meet Him in the sky when He comes again.

This is our BLESSED HOPE to be celebrated this Christmas. Not only did He come, but also gave His life to pay for our sins so we could have the gift of eternal life. And He is coming back!

Jesus is the REASON for this SEASON. As we await this BLESSED HOPE, may it promote healing as we praise Him with gratitude for what He has done.

BLESSED be the God and Father of our Lord Jesus Christ, who according to His abundant mercy has begotten us again to a living HOPE through the resurrection of Jesus Christ from the dead, to an inheritance incorruptible and undefiled and that does not fade away, reserved in heaven for you, who are kept by the power of God through faith for salvation ready to be revealed in the last time.

In this you greatly rejoice, though now for a little while, if need be, you have been grieved by various trials, that the genuineness of your faith, being much more precious than gold that perishes, though it is tested by fire, may be found to praise, honor, and glory at the revelation of Jesus Christ, whom having not seen you love. Though now you do not see Him, yet believing, you rejoice with joy inexpressible and full of glory, receiving the end of your faith—the salvation of your souls. 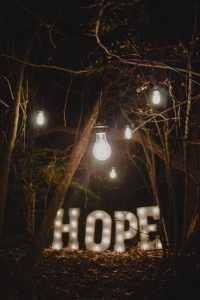 For Your Health and to Give You Hope,