Can We Rebuild Bone Density Naturally?

It was clear from my December appointment with my oncologist that he strongly encouraged me to seek treatment as I moved towards osteoporosis. I was in the osteopenia range before my cancer diagnosis. Your bone density can take a serious hit from cancer treatments. Now I was moving toward osteoporosis in my spine. Here’s the question: Can we rebuild the bone density naturally that we’ve lost due to age or cancer treatments?

To understand, there are things you must know about T-scores in bone density. The normal range is between 1 and -1. From -1 to -2.5 is the osteopenia range. And below -2.5 is osteoporosis. Trust me, you don’t want to get in that osteoporosis range. It must be avoided at all costs whether with medication, natural remedies or both.

After chemotherapy in November of 2015, my total spine T-score went down over one point to -1.86. Yikes, but my left hip T-score went up to -1.40. This shows that my spine bone density took a hit from the chemo. My hips, however improved! And why? I think it was because I walked more than ever dealing with the stress of my cancer journey. Walking helps to build bone density in the hips and legs. It doesn’t necessarily help the spine.

More bad news came when after being on the estrogen-blocking pill for over one year, my spine T-score decreased again to -2.4, but my hips held at -1.42. Our bones need estrogen to keep them strong, and my hormone therapy to prevent the cancer from returning caused my bone density to take another hit.

The red alarm had sounded and that’s when my doctor first brought up treatment. My response, “Give me six months to try to get it back up, first.” And try I did. I asked my doctor to refer me to a physical therapist for exercises to build my bone density. I started doing yoga poses that were designed to build bone density. I also bought a vibration platform. Six months later in November of 2017, my results showed my trio effort had worked. My spine went back up .7 points to -1.72 and my hips progressed to -1.24. No treatment needed.

After two more years of estrogen-blocking therapies, in December of 2019, the alarm was sounded again. My spine had regressed from -1.72 to -2.09. Even though my hips (due to walking daily) held at -1.24, my oncologist brought up treatment again. This time I signed on the dotted line and six months later, the shots would begin.

I went home discouraged, but not for long. I began reading and researching again. Yes, it was an uphill battle to improve bone density while taking those hormone-blocking pills, but I did it before. Surely, I could do it again. I looked back on what I did before. The vibration platform stopped working after six months. It seemed to help, so I found one made by Power Plate. My yoga and PT exercises had helped, but we were gone half the time, so they got half the emphasis. I went back to every day. I saw some advertisements for AlgaeCal and decided to give them a try for six months. Where there’s a will, there’s a way. Would this way work?

Last week, I got the results of my bone density scan done six months after the bad news and after I’d implemented taking AlgaeCal, more exercises and standing on that vibration platform 5 minutes daily. My spine increased in bone density from -2.10 to -.9! That’s 1.2 points—amazing. And my hips increased from -1.24 to -.8. Unfortunately, I can’t tell you which of the three things worked the best. I’m guessing that the increase in exercise was key, but the supplementation with AlgaeCal and the vibration platform all seemed to play a part in my success. 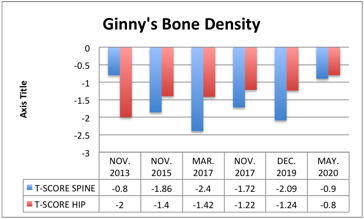 Don’t let anyone tell you that you can’t hold or rebuild your bone density even as you age or go through cancer treatments. The body was created by God to heal and regenerate if only we will do the right things. And if you hear someone singing, “Oh Victory in Jesus,” that would be me! And I just saved my insurance company thousands of dollars.

What are you doing to increase your bone density?